The best laid plans and all that… I had planned to star guide August 29th, but I wasn’t quite done with getting The Initiate done, so delayed for a week. No worries, the sky was still there. Even now, it’s still there.

Only thing was, instead of no moon, I had to deal with a half moon, so I didn’t get to view very much. All was good, since I hadn’t shot any moon photos yet this summer.

Took Orson Bradbury (my telescope) up. Honestly, if I want a decent photo, I have to take my telescope. It slays the 10″ Dobs by leaps and bounds when it comes to stability. Steadiness is not overrated in photography. Nor focus. My telescope has better precision focus than the big telescope.

Saw comet Jacques in the big telescope, and some University of Oregon students were using the 15″, so I had my first peek through it. Helped them find Andromeda, so I got to use it too.

We had no customers, except for three dudes, who preferred hanging with the college gals instead of us. It’s all good. Made for an early night, which I didn’t mind, since my weekends are no longer on the weekends. Friday is middle of the week these days. Anyway… Moon photos:

Saturn came out OK, but it’s not my best.

Dinner and a Bad Movie

Husband Unit and I watch these movies so you don’t have to. We attempted to watch Abraxas – Guardian of the Galaxy. We ended up watching The Giant of Metropolis.

Abraxas – Guardian of the Galaxy. It played less than three minutes. Husband Unit said no before I came out from the kitchen. I think it was Jesse Ventura in the credits that did it. We saw a sci-fi movie long ago with him in it, and, well, we’re not going to watch it again. It was painful enough the first time.

So we moved on to The Giant of Metropolis. Here’s the info from IMDB:

It started out quite promising, campy costumes, overacting, scantily clad star… The experiment room (hey, it’s sci-fi, of course there’s a crazy person experimenting on people) made me think of Han Solo in carbonite. If you watch, check out the interesting decor. You have to see what their powerful rays of light do. I had flashbacks to Charlton Heston in Planet of the Apes (the penultimate scene of over the top – at the end – and my personal favorite).

Then there was this dance number that made me laugh so hard, I choked on my beer. It had to be choreographed by Saturday Night Live. It was ridiculous, out of place, and the way the dudes gyrated… well, there isn’t better at a Chippendale’s Club.

After the dance ended, the movie went down hill. So if you’re interested in watching this movie at all, you can turn it off after the dance number and be confident you saw all the best bits.

The rating… if it had ended at the dance number, I would have given it a half beer to no beer rating. But because of the rest, I had to go up to a 3.5 beer rating. Honestly, the dance is worth seeing.

Husband Unit’s rating: He said there isn’t enough beer on the planet.

Hey everybody, my name is Kai Strand. I was unpacking books at a signing and came across a copy of King of Bad with a torn cover. Bummer. I can’t sell that! But my loss is your gain. Because I can hold a giveaway instead!

Along with a slightly damaged copy of King of Bad, I’m also giving away several sets of character trading cards. These cards have been specially designed for book one in the series. There will be a separate set of cards designed for each book – so be among the first to own a set.

Jeff Mean would rather set fires than follow rules or observe curfew. He wears his bad boy image like a favorite old hoodie; that is until he learns he has superpowers and is recruited by Super Villain Academy – where you learn to be good at being bad. In a school where one kid can evaporate all the water from your body and the girl you hang around with can perform psychic sex in your head, bad takes on a whole new meaning. Jeff wonders if he’s bad enough for SVA.

He may never find out. Classmates vilify him when he develops good manners. Then he’s kidnapped by those closest to him and left to wonder who is good and who is bad. His rescue is the climactic episode that balances good and evil in the super world. The catalyst – the girl he’s crushing on. A girlfriend and balancing the Supers is good, right? Or is it…bad?

Available in print or electronic: 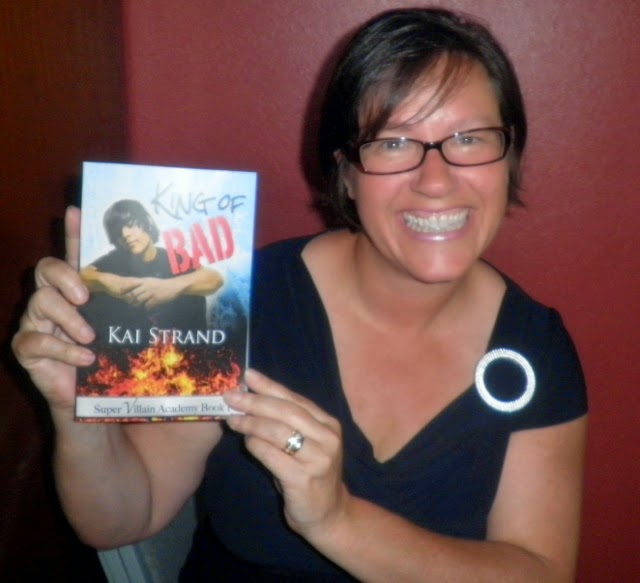 Learn more about Kai and her books on her website, www.kaistrand.com. She bakes a mean zucchini/blueberry bread when she remembers to join us poor writer saps for lunch.

Try book one for free!

Take advantage of the preorder special on book 2, The Initiate. Only 99 cents via preorder from Amazon, iTunes, B&N, and Googleplay. Preorder

That’s two books for one buck! But only for a limited time.

Signups now open for the 2014 Realms Faire. Host an event, sponsor an event, or brave it as a knight in the joust. SIGNUP

The Realms Faire is all about you and helping you gain visibility and connect with readers.

The Rifters BookBlast and #Giveaway

Thursday, September 25th is a Bookblast for The Rifters!

You could win a $25 giftcard to Amazon or B&N. Visit these fine sites to enter:

Art by Retta for an incredible sketchcrawl of Settler, OR. Wow. Really, don’t miss the incredible artistry of Retta. Plus, you could win ebooks.