COMING OF AGE AND THE QUEST TO BELONG

October 12, 2011 Written by MPax
By Bryan Thomas Schmidt
How important is it to you to belong? The coming of age story is an age old trope that continues to fascinate. There’s something about the comfort of certainty that creates an urge in us to be certain about ourselves. Perhaps it’s because the world around us is so beyond our control and full of uncertainties, we desire a place to feel safe and in control. This also may explain why the key years of discovery in people’s lives—the teens and early twenties—are often so tumultuous, filled with experimenting, pushing boundaries, and reevaluating values and identity time and again. 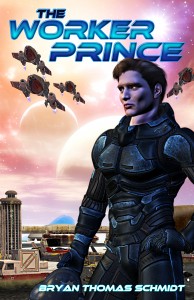 In my novel, The Worker Prince, I deal with a unique kind of coming of age crisis, when the main character, raised a prince, discovers he was secretly adopted and born a worker—the people enslaved by his own. For Davi Rhii that discovery brings huge revelations. For one thing, his status as a Boralian Royal is called into question. Will his family and friends still love him when they know the truth? Even more telling, what does it mean to be a worker? Davi’s quest to answer the second questions leads to great trials and tribulations. Life for the workers is worse than he’d ever imagined. In defending them, he finds himself outcast and on the run, and is forced to reevaluate who he is and what matters to him. Will he joins their fight for freedom? The decisions he makes will change his life and the lives of others forever.
Most teens wrestling with coming of age don’t face such dramatic consequences as Davi does. But still the questions he seeks to answer and the emotions he experiences are familiar to all of us. It’s why the coming of age story remains so popular in literature of all genres. Have you ever stopped to think about who you are and how you go to be there? Have you ever asked yourself what would have happened if you’d made different decisions or gone in different directions? If so, then Davi Rhii’s journey in The Worker Prince will be familiar for you.

Bryan Thomas Schmidt is the author of the newly released space opera novel The Worker Prince, the collection The North Star Serial, and has several short stories forthcoming in anthologies and magazines. He’s also the host of Science Fiction and Fantasy Writer’s Chat every Wednesday at 9 pm EST on Twitter. He can be found online as @BryanThomasS on Twitter or via his website. Excerpts from The Worker Prince can be found on his blog.

The Worker Prince can be purchased HERE.
Thanks to Bryan for this great post. It is intriguing to contemplate where in life I could have decided differently. Tomorrow, Bryan and his Worker Prince tour will be at Gene Doucette http://genedoucette.me/